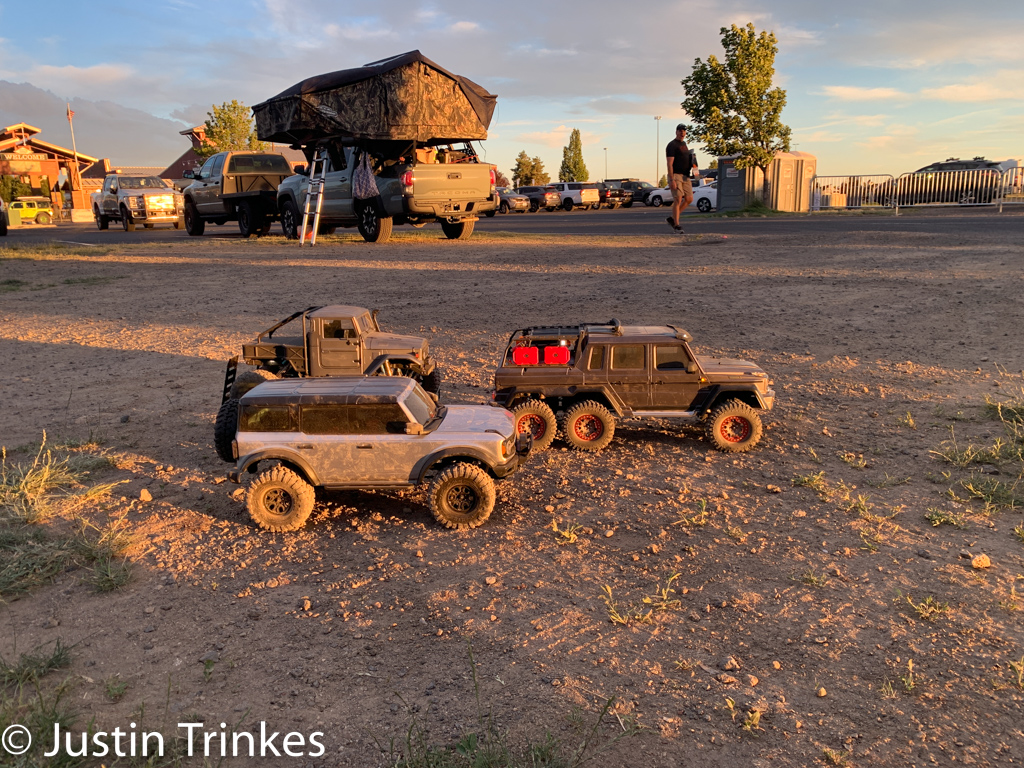 I got rid of my Tacoma over a decade ago and have never been one for overlanding but I enjoy being outside and have fond memories of four wheeling. This year was the first time the Overland Expo was held at the Deschutes Expo Center in the PNW. A huge crowd was in attendance all weekend. Before this year the closest event was in Flagstaff, AZ which Bobby attended in 2017. Back then Bobby and some friends did an overland trip through the back country to get to Flagstaff. If you are going to an overland event why not overland to get there.

This year a few of Bobby’s friends met up and we did a caravan to Redmond, OR. No overlanding required as it’s a straight shot down 26 over Mt. Hood. The expo opened on Friday morning so we got an early start. I met Bobby at his house and we drove to Damascus to meet three of his friends all with decked out rigs like Bobby’s. I wasn’t happy meeting at 8 AM but they wanted to get there early which later turned out to be a good thing.

After a change of plans on where to met we finally hit the road for Redmond. It was a beautiful drive over Mt. Hood. The weather was clear and the temperatures were good so we had some amazing views of the surrounding mountains. Once on the other side of Mt. Hood we could see Mount Jefferson and eventually Three Sisters. The mountains were just crazy to see. Mt. Hood obviously was very close so got a really good look at it on our way to central Oregon. Just beautiful mountains still capped in snow from the winter. Everyone had CB radios too so we talked which made the time pass quickly.

We arrived to the expo center around 1pm. Surprisingly there was no line getting in. We were coming in as a group so chatted with security on where to best setup. Two vehicles had pop up tents and Bobby had the trailer so we wanted to take up some space and make an encampment. Thankfully security let us setup right near the entrance which really worked out. Bobby got to jack knife the trailer to give us some space and then we all got to work setting up camp for the weekend. Our spot was on the main entrance, steps away from the gate with easy access out of the venue.

The pop up folks had their shit done rather quickly. I was impressed. Bobby and I took a little longer because of the trailer and tent but we managed. Even as the afternoon wore on it was very nice in the shade. Bobby and I kept moving our chairs following the shade as we ate lunch and smoked a cigar. It wasn’t till late afternoon that we made it into the expo.

On first look the expo was just bonkers. I had never been to one before so for me not knowing what to expect it was huge. Tons of vendors with everything imaginable you could want for our overlanding experience. Coffee, retailers, so many tents, sleep systems, knives, shocks, battery, power units, and the list goes on and on.

For me the true wonder to behold were all the aftermarket custom builds. It was the Ford 550 trucks that really stood out amongst a crowded field. This is already a huge truck and because they can haul so much stock the sky was the limit. It really just came down to how much money someone was willing to spend on an overlanding vehicle.

We took the afternoon off to get out of the sun and grab some food. The heat really took it out of me so we just stayed around the campsite till late. As we walked up to Ubco we realized the expo closed at 5pm because they were putting the bikes away. Thankfully one of the reps decided to do one more run to accommodate all of us. We road all over the expo grounds which was run. First time on an electric bike like this and it was exciting. Friday was also the raffle night so we all stuck around for that. No one won anything but we scored free tacos from the Toyota tent on the way out so still a win.

Saturday we took our time getting up and getting ready. All morning Cole and Bobby were talking to Paul about their RC trucks. The night before they went on a short parade through the lot. This morning they convinced him to buy a truck that day. Before going into the expo we piled into Bobby’s truck and headed to D’s Hobbies in Bend to pickup a ready to run Bronco and controller. After our quick side adventure we headed back to the expo. I was going to ride another motorcycle and wanted to listen to a talk on outdoor cooking.

Another hot day so late afternoon we headed for shade and lunch at camp. I promptly took a long nap after eating. The sun really takes it out of me and in the shade it was just perfect napping weather. Everyone did their thing and when I awoke I went for a walk through the parking lot to checkout the rigs. These are more practical setups compared to what was on display in the expo. I eventually made my way inside after everything closed. Happy hour was going on and a jam band from Portland was playing, Super Secret Band, so I stayed till they finished.

I got back to camp just as everyone finished cooking dinner so I grabbed a bowl and rested. With Paul’s truck ready to go we did a walk around the parking lot in an RC parade. This got the attention of everyone we came across. As we walked I noticed the place was starting to clear out as dusk settled in.

The next morning we packed and did one last round of the expo. Bobby wanted to checkout all the van stuff we could. He and Tracy plan to travel the country in a van. They have been looking at options and getting ideas. We rallied the troops at 11am and headed to Wild Ride Brewing for beer and food. Miley had been looking forward to a beer slushy and nachos. Bobby and I where in when we heard nachos. I didn’t get a beer but it was good to get food cooked by someone else. Some really good nachos and wings from the food carts.

It was a fun weekending camping and looking at all the overlanding equipment. Even with all that cool stuff I wont be getting a new vehicle anytime soon. I was there to enjoy nature and be at a festival. Festivals are always filled with fun people just looking to have a good time. The high dessert of Oregon was perfect in July. It was warm but only if you where in the sun. At night things cooled off a lot and made for pretty good sleep. Just a perfect long weekend away camping.