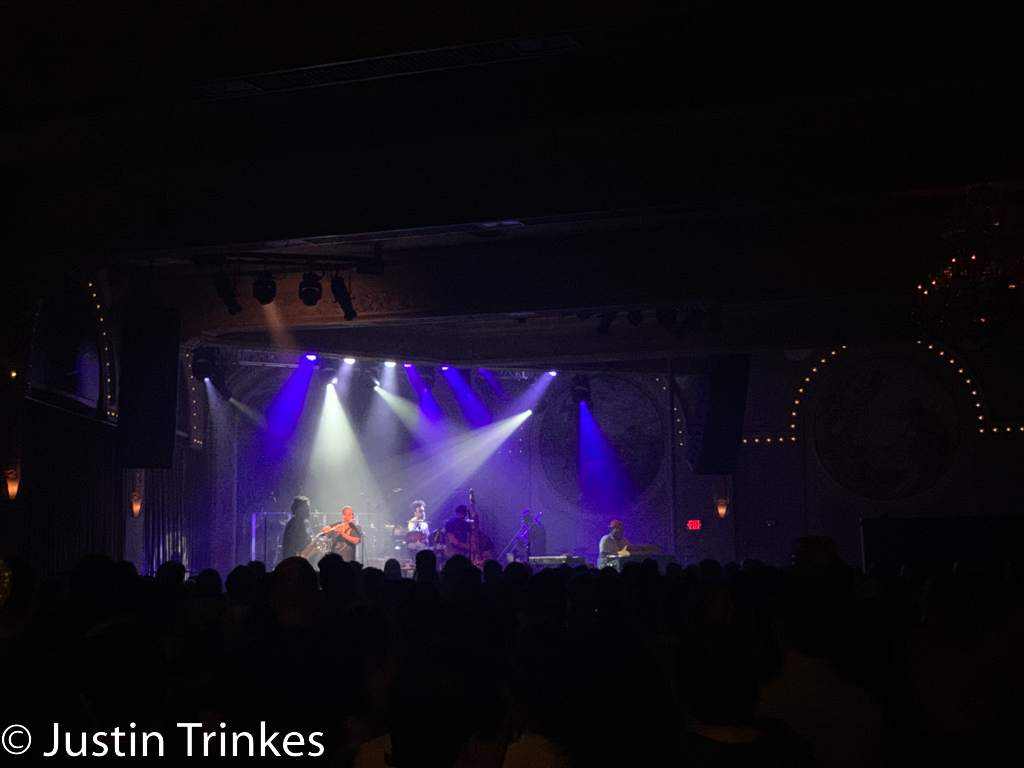 I have been fortunate enough to see Kamasi Washington a few times in my life. Both as a solo headliner and co-headline. I might have seen him at a festival but I can’t remember which one. I have always been impressed with his style of play and the large band he has. With the country opening up Kamasi was on tour again after a short break due to covid.

I didn’t hear about the show till the week before it happened. The prior weekend I was listening to The Epic on vinyl and it got me to looking at the bands home page. They just happened to be on tour and just happened to be swinging through the Pacific Northwest. They were playing the Crystal Ballroom and on a Saturday too! This tour the ticket price was $10 more than a few years ago….fuck you inflation.

As the show approached Portland hit a streak of seriously hot weather. There was going to be no relief from the heat which sucks. The Crystal Ballroom is on the top floor of an old building and it’s AC system sucks. I knew it would be muggy and hot which I was not looking forward to but I plowed ahead with my plan to see the show.

Music started at 8pm and I wasn’t sure if there was an opening act or not. Even with the heat I decided to walk to the venue from my apartment. Its not that far and thankfully the sun was starting to set. When I finally made it to the venue there was a line stretching down the block with people waiting to get in. I made it through security and started walking up the stairs to the venue floor. As I walked up I could hear music pouring down.

At the top of the stairs you make a hard right and in all his glory Kamasi Washington and the band were already jamming out. The heat and humidity hit me right in the face. Yuck. Thankfully today’s show was not a sell out. This allowed everyone plenty of space to jam out. I found an open spot in the back to enjoy the music.

Over the years I have seen Kamasi and the band they have gotten better and better. They are becoming a much tighter group with their playing and especially their hand offs. At times various members would take lead or have a solo and the transitions were flawless. That only comes from playing together for a long time. The grooves were deep and funky. Their playing was really good. No skips, not hiccups, no hesitation.

Special shout out to the bass player. That dude was fucking amazing and for me was the highlight of the night. His grooves and jams blew my mind. He really kept thing grooving and bumping and just made for a wonderful experience.

As the performance went on the heat really got to me. Thankfully they had a water station and I made several trips to get water in an attempt to cool off. Eventually I had to get off the dance floor so I headed down one level to sit outside Lola’s Room to collect myself. I could still kinda hear the music from here. I just need to sit and cool off. I needed to get the nauseous feeling to go away. The security guard kept counting down till the end of the show which was kinda nice. Eventually I went back up stairs to enjoy the last half hour of the show.

The band played for two hours that night which included a one song encore. For a second I thought there might not be an encore. They walked off stage and all of a sudden the house lights came on. People had already started to leave the venue in fact. Strange to see. Thankfully those of us dedicated to music got the band out for one more song before it was finally over.

Even though it was late it was hot outside walking home. I had a good view of the moon walking across Burnside Bridge. Such a great performance by Kamasi and the band. I knew it would be hot at Crystal Ballroom but I made it through most of the show. Very thankful I had a place to sit down because I was on my way home when I spotted the benches. The band has done nothing but get better over the years and it shows in their playing. They are a really tight group of jazz musicians. I’m excited to follow the band and can’t wait to see what comes next with them. Slowly they come out with new albums. As long as they continue to tour it will make me happy. If you like funk and fusion in your jazz you really should check out Kamasi Washington and see his band when he comes to town.